It’s funny how certain things that you owned in childhood stay in your memory.

Growing up, my sister and I weren’t bought stacks of toys. But one or two spring to mind…

Like a ride-on HP Sauce bottle (like this one). My parents collected sauce-bottle labels and sent off for it. I remember it was around long after we outgrew it, just because it was fab.

Another thing I hoarded for years was a stationery set. I can’t remember where I got it. It was either a gift, or something I bought with pocket money, second-hand at a jumble sale (we didn’t have “vintage” back then, only second-hand).

It had a selection of really cute notepapers, housed in a cardboard folder. The sheets had a bright neon pink border and were illustrated with flowers and little girls in a typically 1960s cartoon-style.

It was clearly American in origin, as one of the designs depicted the aforementioned cute girl holding a bunch of flowers and looking sad, with the caption “Why did we scrap? Gee, I’m a sap. Forgive?”

My sister and I thought this brilliant and hilarious and practiced saying it in outrageous American accents. I tried – and failed – to imagine a life in which one might say such a thing.

Anyway, this item is single-handedly responsible for my lasting love of the girls you find on vintage greetings cards and stationery. So pretty! So glamorous! So cute!

It made me immensely happy to discover that I am not the only one who harbours this fascination.

All the pictures in this post are borrowed from Melissa Kavanaugh’s pinterest board, where you will find an absolute treasure trove of this kind of imagery. I urge you to go and have a wallow in it.

I don’t know what happened to my stationery set. I certainly never used it – the right occasion never really arose.

And I would never have thrown it away. It was far too special for that. But sadly, it is no longer in my possession. 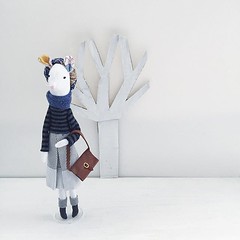